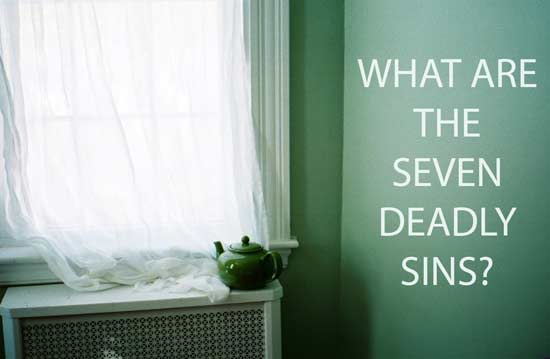 So, you want to know about the seven deadly sins?

It is a good question. We don’t often here about “sloth” in our every day lives. Here is a brief run down of the seven deadly sins defined in a way we can all understand.

Normally, the first idea which comes to mind with lust is the act of sex. It is not uncommon for the idea of forbidden sexual activity to surface upon hearing the word lust. However, lust does not center around sensual pleasures.

Lust is an intense desire.

Lust is an unquenchable thirst. It is something that burns inside and has the potential to consume a person. Lust may show itself reaching for food, power, money, or any other thing an individuals heart may desire.

Do not lust in your heart for her beauty,
and do not let her captivate you with her alluring eyes.
Proverbs 6:25 NET

Usually, the first idea which accompanies the word gluttony is that of cramming food down ones throat. When someone is being considered a glutton, it is often on the basis of them over eating. When boiled down to its core:

Gluttony is simply an over consumption.

Do not spend time among drunkards,
among those who eat too much meat,
because drunkards and gluttons become impoverished,
and drowsiness clothes them with rags.
Proverbs 23:20-21 NET

Green dollar signs flash in front of the eyes of a greedy person. This is the common mental image concerning greed, someone who desires more money than they need. While this idea is accurate, there is something that separates this intense desire for more from the sins of lust or gluttony.

Greed is focused on obtaining material wealth or objects.

Sometimes, greed is evidenced by a questionable choice. Committing other sins in order to obtain a material object displays the greed which exists inside a person.

My people come to you, as they usually do, and sit before you to listen to your words, but they do not put them into practice. With their mouths they express devotion, but their hearts are greedy for unjust gain.
Ezekiel 33:31 NIV

A sloth is a slow, lethargic animal. It lays around, eats, and sleeps. It seems to accomplish nothing. So too does this sin of sloth relate to a persons problem with laziness. Throughout Christian history, sloth has referred to a spiritual laziness which rejects the free gift of Gods grace and salvation. However, this understanding plays off of the biblical idea of sloth and sluggishness.

Sloth is a laziness, an indifference, an attitude lacking motivation.

Biblically, sloth gives way to the downfall, or ruin, of a person. Because of their sloth (laziness or sluggishness), a person must go without their needed desires. Instead of a focus on spiritual aspects, sloth throughout Scripture deals with the physical side of life. The primary focus is on choosing to stay diligent concerning physical tasks which arise throughout life.

Go to the ant, you sluggard;
observe its ways and be wise!
It has no commander,
overseer, or ruler,
yet it prepares its food in the summer;
it gathers at the harvest what it will eat.
How long, you sluggard, will you lie there?
When will you rise from your sleep?
A little sleep, a little slumber,
a little folding of the hands to relax,
and your poverty will come like a robber,
and your need like an armed man.
Proverbs 6:6-11 NET

Wrath brings a thought of someone with a red hot face, screaming out of control. The common thought of wrath is that it is simply a heightened form of anger. This is both true and false.

Wrath is anger which seeks vengeance beyond an offense.

Anger is separate from wrath. Whereas anger may be an acceptable emotion, wrath is defined by the desired actions accompanying that emotion. Wrath seeks retaliation above what is just. Wrath doesnt intend to get even; it goes far beyond what is reasonable.

When they heard this, all the people in the synagogue were filled with rage (wrath). They got up, forced him out of the town, and brought him to the brow of the hill on which their town was built, so that they could throw him down the cliff.
Luke 4:28-29 NET

Envy may bring a mental picture of a person daydreaming about being someone else. It is a feeling of resentment or discontentment which arouses from another individuals possessions or qualities.

Envy desires what someone else has.

Jealousy, that unhappy feeling connected to seeing someone else succeed, is closely connected to envy. However, envy is something separate from jealousy. Envy desires to obtain that object of adoration which causes a jealous feeling. It covets something, and devises a way to obtain it.

Pride is the hardest of the seven deadly sins to pinpoint. It is easy to spot a prideful and arrogant person who walks with their chin up, chest puffed out, and without regard for others who are worth less than they are.

Pride lifts oneself up above all others, including God.

As an individual believes that they are the highest authority, that they are the best performer, or that they are untouchable, then they have dismissed God and His higher power above them. These thoughts of pride show themselves in disregard for the rest of Gods creation, Gods people, and their abilities.

The pride of your heart has deceived you,
you who live in the clefts of the rocks
and make your home on the heights,
you who say to yourself,
Who can bring me down to the ground?
Though you soar like the eagle
and make your nest among the stars,
from there I will bring you down,
declares the Lord.
Obadiah 1:3-4 NIV

their God given potential for life.