How do we know if God does answer the prayers of non-believers? This can be a loaded question.

It is also something that can be easily misunderstood. Therefore, before we attempt to answer this

question, we must understand the exact question we are trying to answer.

What do we mean when we say, Does God answer the prayers of non-
believers?

Two terms in this question can be understood in different ways. The variations of meaning in these

two terms can lead to different answers to this question. So, lets clarify what we mean when we are

Why are we not talking about prayer as a personal request for salvation?

that God raised him from the dead, you will be saved. For with the heart one believes, resulting in

righteousness, and with the mouth one confesses, resulting in salvation.

One says, We know God answers the prayer for salvation of non-believers, otherwise there would

be no Christians in the world. If God did not answer the prayer of those non-believers, then no one

would be able to have their sins forgiven. This idea says salvation is dependent upon a prayer before 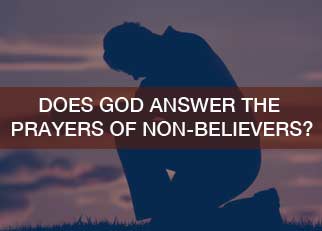 Another says, Once a person believes in Jesus; He grants them eternal life. As soon as someone

first and is the only requisite to salvation.

There is not a separation between these two actions of belief and prayer, but a combination

which occurs. Once a person believes, they pray or confess that Jesus is God. If they are asking God for

forgiveness of sin, then they already believe he is able and willing to forgive. The idea is that these two

realities are working in tandem with each other, not that one must happen before the other.

Understanding if God answers the prayers of non-believers.

Our question is this: Does God respond to the requests of those who are not currently his devoted

We know that God does not listen to sinners, but if someone is devout and

does his will, he listens to this one.

This passage was spoken by a man who knew the Scriptures of the Old Testament. This man had

been born blind. Jesus healed this man; He gave him his sight back. This is a statement showing his

understanding of the Scriptures to prove that Jesus was who He claimed to be.

those not currently devoted to him. However, this mans understanding may have arrived through this

verse and others similar found throughout the Psalms:

The eyes of Yahweh are toward the righteous, and his ears toward their

cry for help. The face of Yahweh is against evildoers

Ultimately, there is substantial evidence that God does not respond to the requests of those not

devoted to his will. He has made it clear in his Word that He is under no obligation to answer the prayers

On the flip side, God has also made it clear that he is under no obligation to answer the many

prayers of believers either. Just because someone is a devoted follower of Christ, does not mean God

will concede to their every request.

Talking to the church at large, James writes this concerning their personal requests:

not from this, from your pleasures that wage war among your members? You desire and do not have;

you murder and are filled with envy, and are not able to obtain: you fight and quarrel. You do not have

because you do not ask. You ask and do not receive, because you ask with wrong motives, in order

that you may spend it on your pleasures.

When does God answer prayer?

God answers prayer when it is according to His will. Anyone, a devoted follower of Christ, a casual

acquaintance with Christ, or a stranger to God and his will, all can rest assured that God indeed hears

their requests. However, God reserves the right to sit in judgment on that request. He weighs the true

motives; He determines the purpose for the prayer, and He sees the outcome from the beginning. This is

an awesome thing about our sovereign Lord; He controls the universe. He can choose what He answers,

what He denies, and what He leaves on the table for later.

Yes, sometimes God does answer the prayer of unbelievers. Sometimes he also denies the prayers

of believers. The important question to ask is this: Is the prayer within the will of God?

their God given potential for life.